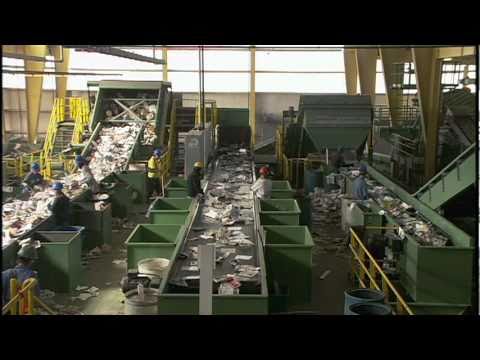 The materials are then sorted, screened, shaken and baled so they can be resold and made into new products. So put on your hard hats and letís see how it all works! Paper Sorting System It all begins out here on the Tipping Floor where bottles, cans and paper are dropped off by the truckload. Powerful loaders then push all this stuff onto one conveyor belt leading to the main facility where the sorting process begins! SIZE is a big deal at the Boulder County Recycling Center and the first part of the sorting system separates the very BIG from the very SMALL. The First Presort First, the BIG things get pulled out at ìThe First Presortî, or what I like to call ìThe Big BAD Thing Removerî! These quick-handed people go through all this and pull out larger BAD things that are very damaging to the recycling system as well as those things that are NOT recyclable.

The non-recyclable items are sent straight to the landfill, so PLEASE help up by only recycling the materials listed in your recycling guidelines. Corrugated Cardboard Screen After those BAD things are removed at the First Presort, the big pieces of CARDBOARD are separated out. The materials bounce and flip and rock and roll over the ìCorrugated Cardboard Screenî and at the top, the large pieces of cardboard drop off the end to the floor where they get nicely baled up and sold to companies who make new things out of old cardboard! As thatís happening, the smaller materials, like me, fall through the screen and onto a series of conveyor beltsÖthat take us BACK into the tipping hall! Hummpf.

Whoooeee! This is better than a good workout at the gym! The Fines Screen So, weíve taken out the biggest materials, now itís the littlest pieces turn to be taken out at ìThe Fines Screenî. These ìfinesî are mostly tiny pieces of broken glass so at the Fines Screen, the broken glass gets removed from paperÖand thatís important! Itís also important that these sharp little pieces come out so they donít cut up the conveyor belts. All these little pieces are sent to the Container Sorting System, which Iíll show you LATER.

But for now, weíll stick with the bigger materials on the Paper Sorting Line as they arrive atÖThe Second Presort! Second Presort The Second Presort is a lot like the First Presort. Here, more busy hands work to pull out MORE materials that either arenít recyclable at all or that canít be recycled at this facility, like these stringy things and plastic bags which are also sent straight to the landfill! Plastic bags are some of the worst contaminants at the recycling center so please, instead of bagging recyclables or sending your plastic bags here, take them to participating grocery stores OR the Eco-Cycle/ City of Boulder ìCenter for Hard to Recycle Materialsî, also known as CHARM. And hereís a hint! Make sure the bags are clean and dry when you drop them off or theyíll STILL end up in the landfill! Or better yet! Avoid using plastic bags all together by bringing your own reusable bag to the store! Back on the lineÖin addition to pulling out non-recyclable materials, these workers also sort out the remaining smaller pieces of cardboard and paperboard like cereal and shoe boxes, which are dropped down dark chutes, baled and sent to market to make new products! Take it away, good buddy! Double Deck Paper Screen After going through the Second Presort, the materials head to the ìScreensî, or more specifically, the fancy ìDouble-Deck Paper Screensî! Remember how the first part of the sorting process was to separate the very BIG from the very SMALL? Well, here at the Paper Screens, weíre separating the CONTAINERS from the PAPER.

Hereís how it worksÖ The Double-Deck Paper Screens separate flat objects, like paper, from round, or 3-dimensional objects such as plastic bottles, steel cans, milk and juice cartons and aluminum cans, like me! The flat papers are what we call ëmountain climbersí. They literally climb up layer after layer of specially designed rubber disks all the way to the top deck. But (puff, puff) containers like me (puff, puff) canít climb the rubber disks. Weíre more like ëboulders in the middle of an avalancheí and we FAAALLLLL backwards onto another screen. Meanwhile, at the top deck, the clean paper takes a flying leap off the end and onto a conveyor belt leading to quality control stations where workers remove any remaining contamination. Paper making it past THESE folks heads to a bunker and waits patiently to be baled and sent to paper markets! Oh! And by the way, since this equipment is sorting flats from rounds, itís important that containers STAY round or 3D, rather than being flattened, or the equipment might confuse a container for a piece of paper and send us to the wrong place! Thatís why we ask you NOT to flatten plastics or cans like me! And please be sure to ball your aluminum foil rather than flattening it! But back at the Double-Deck Paper Screens where all of us containers fell back while the paper kept climbing.

We didnít quite get ALL the paper and containers separated so we do the whole process over again on the bottom deck. Even after THAT, we still have some paper with us, so we need to climb one last mountainÖI mean, SCREENÖand this time, weíre talking about the ìBanana Screenî! Yeppp, this screen is a much steeper climb than the first two, but donít worry, because HERE, the paper has some HELP with the climbÖthe air system! The air system provides air that blows against the paper. That helps the paper stick to the star-disks so they can climb to new heights and up, up and away over the top! But of course, we containers are too heavy for the air stream, so we FALLL back down the screen. And once again, the paper making it over the banana screen heads down a conveyor belt to workers who remove contamination. ALL the cleaned paper then ends up at a giant bunker where itís gathered together, baled and loaded onto rail cars outside the building. Those bales are then off to market to be made into new paper products! Back inside the plant, my container friends and I have gone through three screens to remove the last of the paperÖexceptÖyouíll see there is SOME paper still here.

Once again, it all starts with a presort station where workers check for contamination. If we make the grade here, we continue on to the Cross-Belt Magnet! Cross-Belt Magnet The magnet removes all the steel cans from the stream and ZAP! …discharges them into their own personal bunker. Air Classifier Next, the light and heavy materials are separated by the Air Classifier. The heavy stuff, the glass, jiggles down to the bottom. The light stuff, like plastic bottles, milk and juice cartons and the beautiful aluminum cans rise to the top. A jet of air blasts across the top and shoots the light materials over to our own conveyor beltÖwhee! The plastics are then hand sorted by material and grade and tossed, with respect of course, into the appropriate bunker. From there theyíll go to the baler and then be sold to make new bottles and even materials like counter tops, carpeting and clothing.

Eddy Current Separator And finally, itís MY turn! The aluminum cans are sent to ìThe Eddy Current Separatorî! Ooh, I LOVE saying that! A big magnet inside creates a current that literally propels the aluminum outta there and into its own storage bin. Whew! Once all these light containers have been sorted and baled, theyíre ready for shipment by truck, by train and by ship to markets across the country and even around the world! Air Classifier And now, letís back up to the Air Classifier where the light materials were blown away.

The heavy materials, the glass and all those ëfinesí stay on the conveyor belt. In order for glass to be resold to glass bottlers, everything that isnít glass needs to be removed. Materials like ceramic dishes and plates, stones, metal pieces and other debris COMPLETELY mess up the bottlersí melting process, so they MUST COME OUT! And where does this happen? Drum roll pleaseÖin the ìGlass Cleaning System!î Glass Cleaning System As weíve seen with the other sorting equipment at this facility, the glass system is STILL about size, so the large and small glass pieces are separated by some really fun equipment! First, they go through screens, a rolling drum and then onto a bucket elevator ride! Itís like a glass amusement parkÖI think Iím a little jealous.

As the equipment shakes, breaks and rolls, the glass is trans- formed into pieces no bigger than 2 inches across. Manual Glass Sort Line Yahooo! After that ride comes another group of friendly hands to remove any plastic or other containers that slipped under the Air Classifier ride. But not to worry. These materials are hand-delivered back to the Container Sorting System where they belong! Organic Separator After all that fun, the glass goes through a water mister, just like at the water park! Here, a fine water mist wets the paper which sticks to a rotating drum and ta da! Glass is separated from paper! Fines Screen and Vacuum But wait! Thereís still more cleaning to do.

The glass travels through another vibrating screen and under a vacuum. The vacuum sucks up any remaining small pieces of plastic and paper and sends it to whatís called ìthe Cycloneî where a centrifugal force pushes the paper and plastic out of the air stream and into the compactor for disposal. Yes, you may think the glass is having too much fun, but now itís time for some serious undercover work. KSP Unit It all takes place in a box called the KSP Unit where ceramicsÖ stonesÖ and porcelainÖ, and additional contaminants are removed. This special unit is equipped with two optical detection devices and itís the main reason the Boulder County Recycling Center produces clean glass like nobody else in the business! As the glass moves through the machine, special cameras watch.

Light beams are shot at the glass and the camera can tell if the light goes through the glass. If it doesnít, a computer connected to the KSP knows the material is not glass and that it must be removed. The computer signals air jets to push the non-glass materials out and into a conveyor bound for the landfill. Ah ha! Gotcha! Whatís left is clean glass, free from paper, porcelain, stones, ceramics and other non-glass materials, that is conveyed into a storage bin and later transported to the bottle manufacturer to make glass bottles.

This glass sorting system is effective, but it sure took a lot of energy to remove those materials that should not have been put in the recycling bin in the first place! Reduce! Reuse! Recycle! Compost! And thatís how it all happens! The Boulder County Recycling Center is doing its part to help Boulder County become a Zero Waste Community by 2025. But because weíre all in this together, remember to Reduce! Reuse! Recycle and Compost! Because when you do all that, youíre giving ME another chance! See you next time around! Credits A Boulder Channel 8 Production.